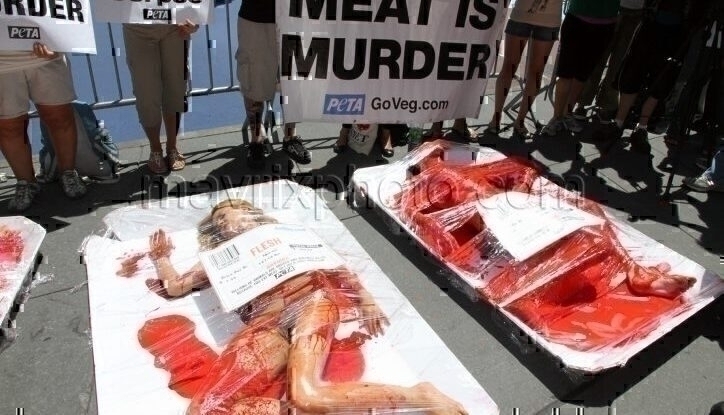 Three unabashed protesters took to the streets — and pavement — of New York City’s Times Square today to stage the latest PETA protest which aimed to encourage meat-eaters to go vegan.

While others held signs that read ‘Meat is Murder’ the trio stripped down to get covered in red paint and wrapped in cellophane, mimicking meat packages.

Large stickers on the ‘packages’ read ‘Billions of Animals Are Abused and Violently Killed Because You Eat Meat. Get Help! Visit GoVeg.com’.

Senior PETA campaigner Ashley Byrne was quoted as saying, “We are challenging people to really think about what ‘meat’ is. When you eat flesh, you’re eating the corpse of an abused animal who did not want to die. We’re encouraging kind consumers to try going vegan.”

It’ll really make ya’ think twice next time you walk down that grocery store meat isle.