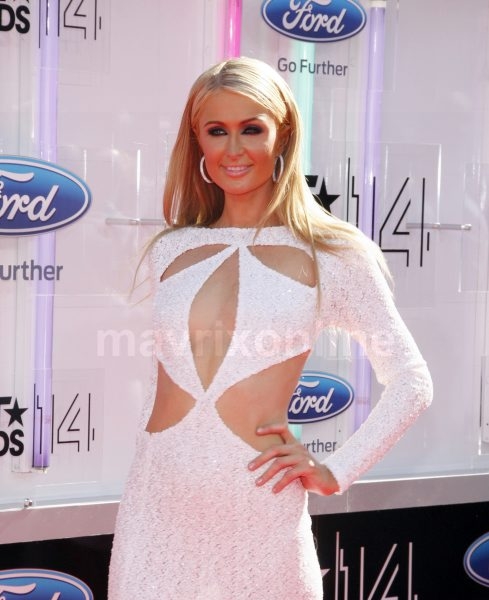 Paris Hilton at the 2014 BET Awards held at the Nokia Theatre L.A. Live in Los Angeles. Paris Whitney Hilton (born February 17, 1981)[1] is an American media personality, businesswoman, socialite, model, singer, actress, and DJ. She is a great-granddaughter of Conrad Hilton, the founder of Hilton Hotels. Born in New York City and raised there and in Beverly Hills, California, she began her modeling career as a teenager when she signed with New York-based modeling development agency Trump Model Management. Her late-night persona made her a fixture of tabloid journalism, and Hilton was proclaimed “New York’s leading It Girl” in 2001.[2] In 2003, a leaked 2001 sex tape with her then-boyfriend Rick Salomon, later released as 1 Night in Paris, catapulted her into global fame, and the reality television series The Simple Life, in which she starred with her socialite counterpart Nicole Richie, started its five-year run with 13 million viewers, on FOX.