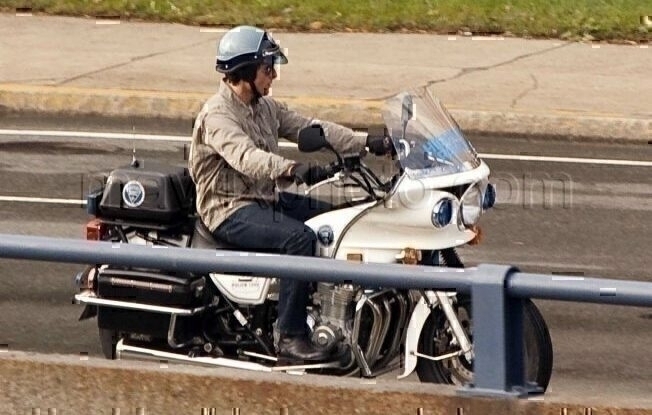 I know what you’re thinking. No, Tom Cruise isn’t dressed like a cop about ready to sing Y.M.C.A. with an Indian and a construction worker for some sort of new role playing adventure with Will Smith Katie Holmes. Get your head out of the gutter!

Tom’s filming Wichita, which I can only assume is about Kansas. Don’t ask me why the movie is filming in Massachusetts, I don’t have the answers to everything. Maybe the gays of Kansas ran him out of the state after seeing his third rate Village People outfit? Midwestern homos don’t play around with stuff like that — you can’t half ass your gay icon costumes and expect a pat on the back for your effort. And if he thinks the gays of Wichita are hardcore, he should see what the gays of Omaha are like. Seriously, I have stories.

So here’s my deal with Tom: I know he’s totally weird and creepy, and I’m 93 percent sure his marriage with Katie is a sham. That said, I really, really like his movies. There really aren’t too many Tom Cruise flicks that I haven’t seen at least 100 times (and loved).

Top Gun, Days of Thunder, Mission: Impossible, That one movie where he’s a lawyer in the Navy, and I even got down with  Lions for Lambs. Don’t even get me started on Risky Business, because I don’t have the words to describe that timeless masterpiece. Hell, I even liked Valkyrie, though I’m ready to admit that I was probably the only person in America willing to give it two enthusiastic thumbs up.

People can say what they will about his personal life, but boyfriend is talented.